The main idea of this chapter is:

What Makes a System Linearizable?

Let's talk about few examples that linearizability is a requirement.

One way of electing a leader is to use a lock: every node that starts up tries to acquire the lock, and the one that succeeds becomes the leader. The acquiring lock must be linearizable.

Apache ZooKeeper and etcd can be used to implement distributed locks and leader election.

Strictly speaking, ZooKeeper and etcd provide linearizable writes, but reads may be stale, since by default they can be served by any one of the replicas. You can optionally request a linearizable read: etcd calls this a quorum read, and in ZooKeeper you need to call sync() before the read

How to implement linearizability (behave like a single copy of data), and tolerate faults (by holding more than one copy of data)? 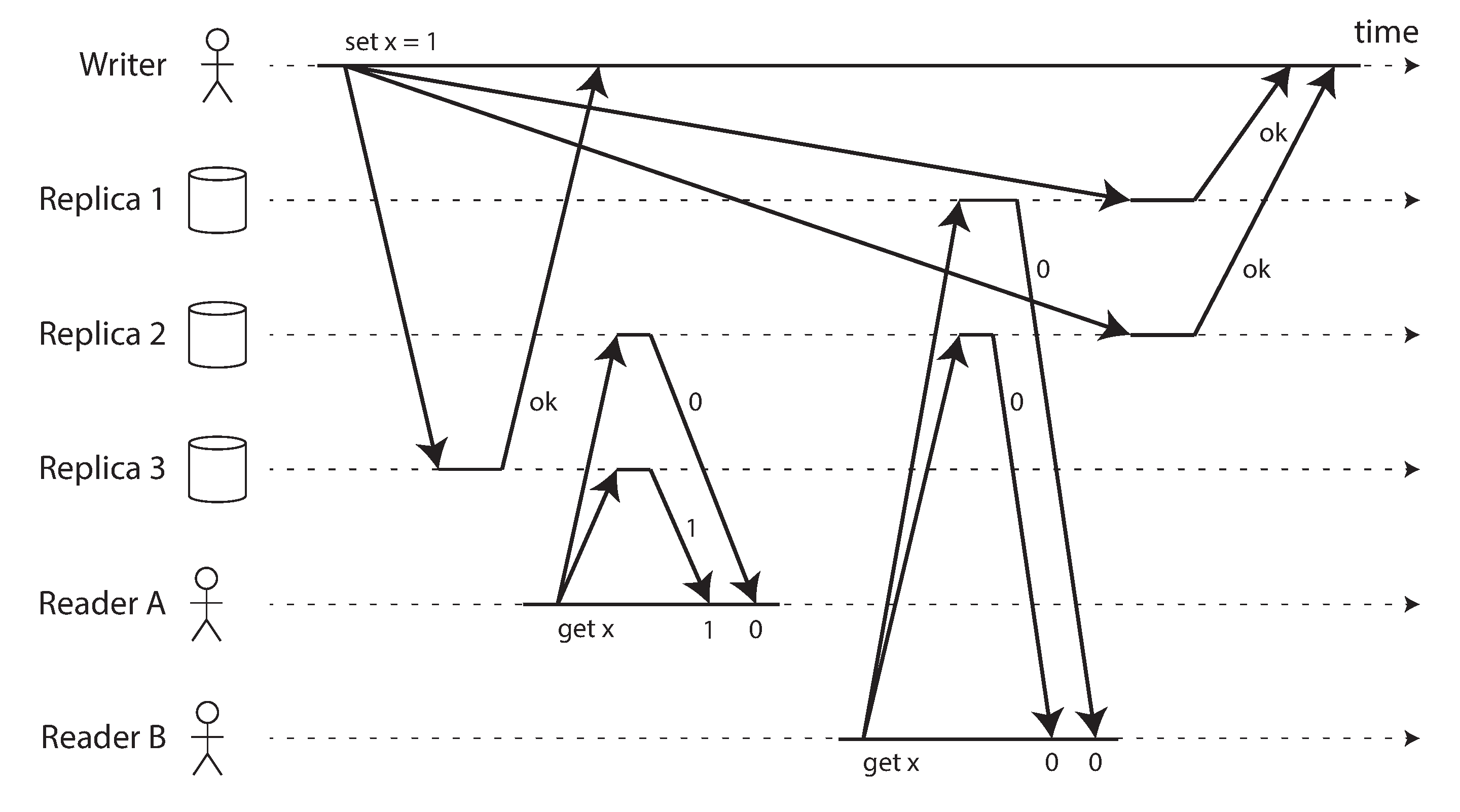 The Cost of Linearizability

CAP only considers network partition, it does not consider network delays, dead nodes, or other trade-offs. There're many more impossibility results in distributed systems: A Hundred Impossibility Proofs for Distributed Computing (1988)

CAP has now been superseded by more precise results:

The reason for dropping linearizability is performance, not fault tolerance. Sequential Consistency Versus Linearizability (1994) proves that response time of read and write requests is at least proportional to the uncertainty of delays in the network, if you want linearizability.

Ordering is an important fundamental idea:

The causal order is not a total order

Linearizability is stronger than causal consistency

In practice, these methods can generate sequence numbers for operations:

These are more performance than a single node, but notice the sequence numbers they generate are not consistent with causality.

Note that it is possible to make physical clock timestamps consistent with causality:
in [[DDIA-8 The Trouble with Distributed Systems#Synchronized clocks for global snapshots]] we discussed Google’s Spanner, which estimates the expected clock skew and waits out the uncertainty interval before committing a write.
This method ensures that a causally later transaction is given a greater timestamp.

Leslie Lamport: "Time, Clocks, and the Ordering of Events in a Distributed System (1978)" is the most cited paper in the field of distributed systems. Lamport timestamp is a simple method for generating causally consistent sequence numbers.

Notice when client A writes max=1 to node 2, it receives (5, 2) timestamp, the next write to node 1 increases node 2 counter to 6.

What ensures the ordering is that every causal dependency results in an increased timestamp.

Timestamp ordering is not sufficient

How to scale the throughput beyond single leader and handle failover?

However, supporting atomic operations such as compare-and-set or increment-and-get in a register makes it equivalent to consensus. Thus, the problems of consensus and a linearizable register are closely related.

In fact, linearizable compare-and-set (or increment-and-get) register and total order broadcast are both equivalent to consensus.

The simple yet fundamental goal: get several nodes to agree on something.

What are situations in which consensus is required?

The algorithms for consensus:

From single-node to distributed atomic commit

When multiple nodes are involved in a transaction?

A system of promises

Two crucial "points of no return" that ensure the atomicity:

The coordinator retries indefinitely for the commit phase until it hears back from all the participants. The participant node, if crashed, should recover and commit.

If the coordinator crashes or the network fails at this point, the participant can do nothing but wait (in doubt or uncertain).

In principle, the participants could communicate among themselves to find out how each participant voted and come to some agreement, but that is not part of the 2PC protocol.

The coordinator must recover from reading the transaction log. Notice this is a blocking protocol.

Much of the performance cost inherent in two-phase commit is due to the additional disk forcing (fsync) that is required for crash recovery, and the additional network round-trips.

Cloud vendors like Azure does not provide distributed transactions:

What we mean by "distributed transactions"?

XA assumes that your application uses a network driver or client library to communicate with the participant databases or messaging services. The library is responsible for participants tracking, crash recovery and communication with the database server.

Holding locks while in doubt

The lock will prevent any write or potentially read to the data. If coordinator does not recover, the lock will block other transactions forever.

They decide on a sequence of values, in other words total order broadcast. This is equivalent to performing several rounds of consensus.

Why [[DDIA-5 Replication#Leaders and Followers]] did not worry about consensus?

How does a leader make decision:

Looks similar to 2PC, differences are:

What are the cost?

Coracle: Evaluating Consensus at the Internet Edge: Our insight is that current consensus algorithms have significant availability issues when deployed outside the well defined context of the data-center.

Figure 3 shows the reachability between 4 hosts, one of which is behind a poorly configured NAT, allowing it to transmit messages to all hosts but not hear responses.
This host will never be able to hear the leader’s heartbeats and thus will continually timeout, increment its term and start a new election.
When contacting the other hosts, it will remove the current leader and continuously force leader election, rendering the system unavailable.

How a service like ZooKeeper or etcd is used?

Combining these features, ZooKeeper can be very useful for distributed coordination.

Use atomic operations, ephemeral nodes and notification in ZooKeeper can achieve auto recover from faults without human intervention.

ZooKeeper usually run on a small (3/5) fixed number of nodes to support potentially large number of clients. It provides a way of "outsourcing" some of the work of coordinating nodes to an external service.

Data managed by ZooKeeper is slow-changing (in minutes or hours). For replicating runtime state, use tools like Apache BookKeeper.

Solves the problem that virtual machines continually come and go in cloud environments, and you don't know the IP address of your services.

Solution is to configure your services such that when they start up they register their network endpoints in a service registry, where they can then be found by other services.

Leader election requires consensus, consensus system can help other services know who the leader is. Async replica do not vote but can serve read requests that do not need to be linearizable.

Note: using ZooKeeper for service discovery means when network partitions, other services can't get response back. If availability is preferred, Eureka might be better option.

A membership service determines which nodes are currently active and live members of a cluster. By coupling failure detection with consensus, nodes can come to an agreement about which nodes should be considered alive or not.